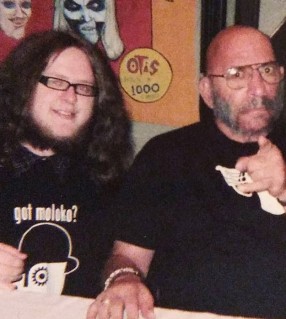 Like many horror movie fans who frequent the convention scene, I’m happy to say I had the very good fortune of meeting  Sid Haig. I actually did so multiple times over the years, because he was just so damn fun to talk to. Sid was a convention regular and always seemed happy to hang out with his fans. Above is a photo of him and I from back when I was a baby-faced college freshman.

Though best known these days as the crude serial killing clown Captain Spaulding from Rob Zombie’s movies House of 1000 Corpses, The Devil’s Rejects, and the recently released Three From Hell, Sid was an insanely accomplished character actor with a resume longer than John Holmes’ third leg. He was in such cult-classic flicks as THX-1138, Spider Baby, Galaxy of Terror (a major personal favorite), Foxy Brown, Coffy, The Big Doll House, The Big Bird Cage, Kill Bill Vol. 2, Jackie Brown, Hatchet 3, The Lords of Salem (another big favorite of mine), and Bone Tomahawk. .

Suffice to say, the man was a true workhorse. The quantity of his performances was matched, however, by their quality. Whether it was a Filipino women-in-prison b-movie or a Quentin Tarantino-directed Hollywood blockbuster, whenever Sid was onscreen you paid attention. Though some of his parts were small, even the biggest pictures he was in would’ve been noticeably worse without his presence.

Likewise, the world in which we live is noticeably worse now that he’s gone.