This one has been in the works for a while! Now available from Dunhams Manor Press, In Stefan’s House: A Weird Fiction Tribute to Stefan Grabinski is one of the most personally signficiant anthologies I’ve ever been involved with. Why? Because of the man who inspired it.

Stefan Grabinski has often been called “the Polish Poe” and “the Polish Lovecraft,” and while those comparisons properly evoke the enormity of his talents and the level of renown he should have had, they don’t really do justice to how unique his work really was. Grabinski’s “psychofantasy” or “metafantasy” stories (as he liked to call them) were informed by his lifelong interest in mysticism, demonology, and the occult, as well as by his dueling emotions of awe and anxiety towards industrialization (manifested most notably in the author’s many depictions of thunderous, fuming, untamable steam engines). These are stories that are both folkloric and psychological, obsessive and inquisitive, erotic and surreal.

And yet, within his lifetime Grabinski achieved only modest success in his native Poland, and not much at all outside of it. He was summarily forgotten, for the most part, following his death in 1936. I can’t say I remember how I first heard about him, but I’m thankful that I did. He’s become one of my all-time favorite writers, easily among my top five. In recent years, there’s been a small but noticeable upswing in Grabinski appreciation. Though he remains somewhat obscure, his work has come to mean a lot to me over the years, so it’s energizing for me to see him slowly but surely receiving the acclaim he is long overdue.

It’s even more energizing to think I might get to play some small part in that process.

In Stefan’s House has been a labor of love a long time in the making. My story, “The Witch Engine,” is an attempt is to look at some of Grabinski’s major recurring themes through the lens of my own experiences as a child of the modern age. To Grabinski, locomotives were the vessels of the future. To me, they are relics of the past. With “The Witch Engine” I wanted to explore the tension that lies between those two perspectives. I hope I managed to do the idea at least a small measure of justice.

My fellow contributors for this anthology include such humblingly talented individuals as Brian Evenson, Steve Ransic Tem, Michael Faun, Christian Wiessner, C.M. Muller, and more. To preview the entire contributor list, and to buy yourself a copy, go to the Dunhams Manor Press webstore. Paperback editions are just $15. If you’re looking for something a bit fancier, though, a very limited edition hardcover version will soon be available for $45, featuring new cover art and original interior illustrations by artist Mutartis Boswell. Down below you’ll see a jaw-droppingly gorgeous piece that accompanies my story. If you want to see the rest, buy the book! 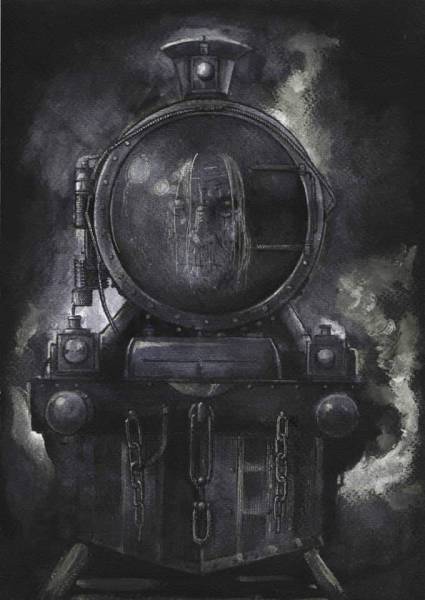