Pop quiz: Who’s your favorite director? Not just of horror movies, but in general. For me the answer will always be Lucio Fulci, Italy’s dearly departed king of surrealistic splatter. Knowing that, you can imagine how over the moon I was when Muzzleland Press head honcho Jonathan Raab asked if I wanted to return to his ongoing blog series, “Creature-Feature Conversations,” to discuss one of Fulci’s all-time greatest films with him and author Thomas C. Mavroudis.

Raab and I previously watched and discussed the 1991 Dan O’Bannon movie The Resurrected, which was a lot of fun (I highly recommend you give our conversation I read). Getting to talk about The Beyond with Raab and Mavroudis, though? That was a blast.

Like a bullet through the face of an evil little girl with ghost-white eyes, oh yes, it was definitely a blast.

Enjoy the zombie-filled trailer for The Beyond below, then redirect those big beautiful ungouged peepers of yours over to the Muzzleland Press website to get your Fulci fix. 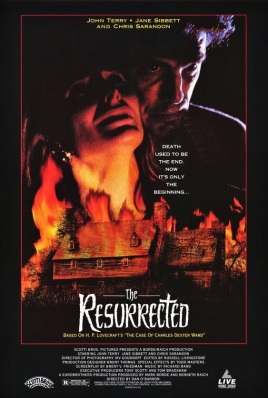 COVID-19 got you down? You’re not alone. Luckily, to make this ongoing quarantine a little less boring and a lot more spoopy, author/editor/publisher Jonathan Raab of Muzzleland Press has resurrected his blog series “Creature-Feature Conversations.” Every few weeks, Raab and another writer will watch a horror movie, then have a back-and-forth conversation about it via email, which will then be shared online in its entirety for your amusement and/or derision.

Featured authors thus far have included Gemma Files, Mer Whinery, Sean M. Thompson, Dominique Lamssies, and Brian O’Connell, with many more to come. Conversations cover everything from behind-the-scenes history to thematic analysis to MST3K-style ribbing. This week, I was fortunately enough to play Siskel to Raab’s Ebert as we discussed the semi-obscure 1991 H.P. Lovecraft adaptation The Resurrected. I’ve shared the trailer down below, for those interested. Give it a watch and then head on over to the Muzzleland Press website to see what Raab and I had to say about grisly this cult flick from Return of the Living Dead director and Alien scribe Dan O’Bannon (R..I.P.).

Hey now, here’s something cool that doesn’t happen to a schmuck like me every day. Remember that upcoming anthology I recently posted about having a story in, the one kick-assedly titled Behold the Undead of Dracula: Lurid Tales of Cinematic Gothic Horror? Well, in keeping with its cinematic theme, the book is getting its own official soundtrack album, comprising an all-original score by Black Mountain Transmitter.

Below are the full details, as announced on the Muzzleland Press website. And because editor Jonathan Raab is straight-up one of the most fun people working in genre fiction today, he wrote it up as if “Behold the Undead of Dracula” were a real long-lost forgotten monster movie. Who knows? Maybe it is.

The dread count has risen from his grave and teamed up with a mad descendant of Baron Frankenstein to raise an army of ghouls augmented with the power of forbidden science!

Graphic, gothic, sensual, lurid, and banned in twelve countries, Behold the Undead of Dracula is an infamous, blood-drenched, and lurid forgotten classic of the gothic revival period. Overtly weird and violent, with cosmic horror elements fused into the classic vampire tale, it terrified and confused audiences during its early 1970s debut, only to be forgotten shortly after its release… until now.

The film’s official soundtrack has been discovered in a secret chamber of a cursed film studio vault deep within the dark woods of Northern Ireland, and is available now for the first time since its aborted vinyl release in 1974 (all copies having been destroyed in a fire that preceded the filmmakers’ grisly murder-suicide pact). The mad musician behind Black Mountain Transmitter will be handling distribution of the digital and physical copies!

Get your copy of the soundtrack FREE with your purchase of our new anthology, Behold the Undead of Dracula at NecronomiCon Providence August 23-25 (vendor/dealer’s room)! Limited to the first 100 copies sold. After the convention, the remainder of the initial run will be available on our storefront exclusively, and will include download codes! 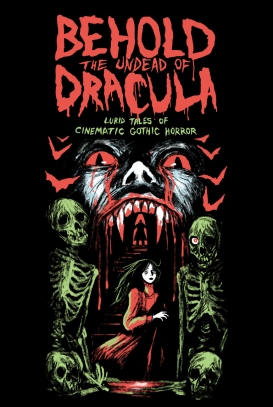 As if that wasn’t thrilling enough, the anthology in question just so happens to be a tribute to the colorful carnage of Roger Corman’s Poe pictures, the psychedelic psychosis of Mario Bava, and the grisly, gloomy gothicism of Hammer Film Productions.

Edited by Jonathan Raab and published by Muzzleland Press, Behold the Undead of Dracula: Lurid Tales of Cinematic Gothic Horror will debut at NecromiCon Providence 2019 in August. Paperback and ebook copies will be available online shortly thereafter. In the meantime, sink your fangs into the table of contents below:

“Go to the Devil” by Matthew M. Bartlett

“Over the Violets There That Lie” by Gwendolyn Kiste

“George Strait and the Black Orchard Grimoire” by Mer Whinery

“Vengeance of the Blood Princess” by Dominique Lamssies

“Diabolus in Musica” by William Tea

“Taste of Fear in the Night (European Release Title: Curse of the Mountain Witches)” by Tom Breen

“You Should Smile More: The Blood Coven of Arkana” by Heather L. Levy

“Cleaver Castle of Carnage Presents: The Coven Strikes Back” by Christa Carmen

“The Bloody Cask of Rasputin” by Thomas C. Mavroudis

“The Filthy Creation of Frankenstein” by Gemma Files

Well, this is a first! I can’t quite wrap my mind around the idea of someone liking something of mine enough to be a “fan” of it, but I’m nevertheless amazed and humbled to know that a story I wrote (“Reset,” from the video game-themed horror anthology Terror in 16-Bits, which you can get through the Muzzleland Press webstore or Amazon.com) inspired someone else to create something. If you’ve read “Reset,” you know all too well the critical moment this illustration depicts; if you haven’t, then you should probably get yourself a copy so you can find out all about it! Anyway, major props to Mat Fitzsimmons of Feral Teeth Press for making this image, and additional thanks to Terror in 16-Bits editor/publisher Jonathan Raab for bringing it to my attention. I love this so much!