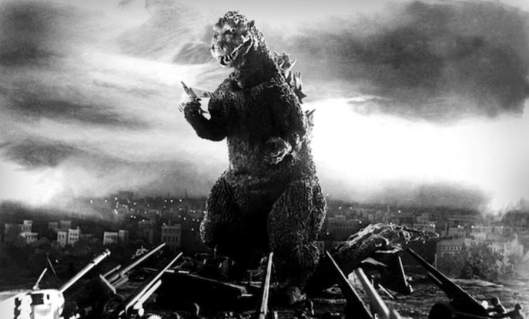 A great black shadow falls over the Japanese metropolis. Thousands of innocent people flee in terror, but atomic fire burns them to smoking silhouettes. Streets shatter, skyscrapers crumble into dust, and a new monster is born, one whose devastation will be both evoked and invoked time after time in the coming generations.

From that description, tell me, does it sound like I’m talking about Gojira or Hiroshima?

As a decades-old monster movie icon, Gojira (known better as “Godzilla” in the west, but he’ll always be “Gojira” to me) has played many roles over the years. He’s been a hero just as often as he’s been a threat. In America, he’s been mistreated and misrepresented as a CGI joke, little more than an exercise in crass corporate branding and “cinematic universe” ambulance-chasing. For most of his career, though, he’s been an embodiment of pop art, and I mean that in the best sense of the term.

The Gojira movies that so many of us (including yours truly) grew up with were essentially horror cartoons, campy and colorful celebrations of weird monster art, explosive action, and cheesy special effects. I say this with no disrespect. For me, “cheesy” and “campy” are very much positive attributes. But the truth remains: The Gojira who battled UFOs, robots, time travelers, and telepaths, who gave Minilla piggyback rides on his tail, used Anguirus like a soccer ball, and celebrated the defeat of King Ghidorah with a jaunty dance number, that Gojira, the one I know and love as much as any other kaiju fanboy worth his salt, represents low stakes as much as he does good fun.

As children (whether in body or spirit), we thrilled at the sight of the big lizard stomping tanks, throwing haymakers at apartment buildings, and roasting everything in sight with his nuclear breath. We were given the green light to cheer on the chaos and root for the monster precisely because of how obviously fake the entire spectacle was. We knew that no one was in those tanks, that no one was in those apartment buildings. We knew that the monster was just a man in a suit, and that all those little planes, trains, and automobiles were just models, often dinky ones at that, no more real than the Hot Wheels cars we collected in grade school. Indeed, the movies rarely ever tried to convince us otherwise; in Gojira’s world, all these structures existed for no other purpose than to get wrecked.

Because of this, we audience members could relish the on-screen annihilation without reservation or guilt. We were given permission to vicariously indulge our destructive impulses and fully immerse ourselves in the fireworks of so much carefully orchestrated anarchy. The only characters that really mattered were the kaiju themselves; the humans were generally afterthoughts. We related to Gojira, Rodan, Mothra, Baragon, Megalon, and Gigan. When these titans clashed, we picked sides and hunkered down for a show like it was a pro wrestling match.

(The fact that there nowadays exists a wrestling promotion called Kaiju Big Battel, whose performers actually strut their stuff while dressed as giant monsters and brawl in squared circles decorated with model buildings, is a testament to just how much of Gojira’s legacy is steeped in the same kind of over-the-top comic-book pageantry as, say, lucha libre.)

It wasn’t always this way, though. Hack away at more than half a century’s worth of embellishments, tangents, and reinventions, and you’ll find Gojira’s heart a smoldering scar, radioactive with pain and tragedy. Released in 1954, just nine years after the Allied bombings of Hiroshima and Nagasaki, the original Gojira is very different from the sequels that followed.

For starters, it’s in black-and-white, one of only two such films in the entire franchise (along with the 1955 sequel, Godzilla Raids Again). Superficial though this may seem, it actually has a startling effect on the film’s visual attitude and atmosphere; director Ishirō Honda and cinematographer Masao Tamai express the story’s figurative darkness by embracing literal darkness, meticulously crafting high-contrast monochromatic images that are at once beautiful and oppressive. The film seems to take place entirely at night, and the big lizard himself is depicted as being almost pitch black in color, a lumbering personification of death in all its merciless, monolithic inevitability.

What’s more, submerging so much of the film’s visuals in shadow helps hide the artifice in a way that later franchise entries simply can’t. Darkness conceals the particulars of the model buildings and vehicles that Gojira tears his way through, and our imagination fills in the gaps, making it ring truer than a more brightly lit miniature, no matter how methodically detailed, ever could.

With that sense of realness, however, comes a morose sobriety. The mayhem Gojira unleashes in his debut carries real weight with it and it hangs heavy on your heart. The destruction here is not “safe,” it is not sanitized. It doesn’t read as hokey, fantastical, or fun. Honda, who co-wrote the screenplay with Takeo Murata (based on an initial idea from producer Tomoyuki Tanaka), doesn’t shy away from showing the brutal reality of the havoc Gojira wreaks. Even now, the sight of a Japanese cityscape in flames is chilling; one can only imagine what it must have felt like not ten years removed from WWII.

Even more haunting are the broken, twisted bodies crushed under the rubble of buildings they once called home, the overworked doctors struggling to tend to a constant influx of injured civilians, and the young children suffering in the throes of severe radiation sickness. Such imagery is something Japanese people of the time were all too familiar with, having been subjected not only to the atomic onslaught of Hiroshima and Nagasaki, but also, in the very same year as Gojira’s release, the events of the “Lucky Dragon 5” incident, wherein a crew of fishermen sailed too close to a bungled American nuclear bomb test near Bikini Atoll. As if to hit the nail on the head, this event is recreated in the film’s opening scene, implying that U.S. nukes are to blame for the big lizard’s wrath.

While the rest of the Gojira films are more or less feel-good popcorn monster movies, the first one is more like a cross between an unromanticized disaster epic and a grim ‘n’ gritty war picture. The human toll of Gojira’s rampage is front and center in a way it never is again in the series (at least not until Shin Godzilla, but I’ll get to that later). Not only do we see the destruction as it happens and the heart-rending aftermath, but, also, we are granted access to several well-developed human characters. Through them, the film explores more than just the practical challenges of facing a kaiju threat, it also investigates the emotional, moral, and philosophical implications.

Case in point: Dr. Daisuke Serizawa (played by Akihiko Hirata), a scientist researching a new chemical process which could very well be the key to building a weapon capable of downing the big lizard. The problem? A weapon powerful enough to kill Gojira would itself be just as dangerous as Gojira, and the good doctor (a military veteran who lost an eye in WWII) is loath to trust such a device in the hands of foolish, flawed, fallible men.

Again, the parallels to real life are striking, even if they’re not entirely subtle. These parallels are, more than anything, what sets apart the first Gojira from its seemingly endless conga-line of follow-ups. For me, one of the primary features that makes horror, sci-fi, and fantasy storytelling so captivating is the ability to confront issues and themes head-on. Instead of obscuring them beneath layers of plot and subtext, they are instead integrated into the plot as full-blooded characters. In genre fiction, inner demons get to be actual fire-and-brimstone devils; symbols are given sentience.

In an interview from 2005, producer Shogo Tomiyama (who oversaw the Gojira franchise from the 1980s through to the early 2000s) compared the big lizard to a Shinto “God of Destruction,” an unstoppable inhuman force, like a storm, which simply cannot be reasoned with, can barely even be understood by petty human minds. Revisiting Gojira’s roots, then, serves a worthwhile function. That is, it reminds us just what kind of symbol the big lizard actually is. When you get right down to it, what Gojira symbolizes is a uniquely Japanese experience (which is why I’ve personally never warmed to any of  the American adaptations). Gojira symbolizes the radioactive horrors of Hiroshima, Nagasaki, and Lucky Dragon 5. If you prefer to look at things more broadly, he also symbolizes the reprehensible horrors of WWII, and of war in general.

Despite the almost superheroic molds we’ve forced him into in the 60 years since he first rose up out of the wine-dark sea, despite all the remakes, reboots, and animated Saturday morning spinoffs, underneath it all, Gojira is an amoral engine of doom. He may have been created by man, but the King of the Monsters owes allegiance to no one.

None of my saying this, mind you, is meant as a jab at the later films for “neutering” the character or anything like that. No sir. If nothing else, I hope you’ll take this long, meandering love letter of mine as an appreciation for how versatile Gojira has proven over the years. The most recent entry in the series, Shin Godzilla, in many ways returns Gojira to his roots, reflecting anxieties brought upon by such recent tragedies as the 2011 earthquake and tsunami in Tōhoku, and the subsequent Fukushima Daiichi nuclear power plant accident.

I love that a character like Gojira can be used like that. I love brooding, allegorical, black-and-white Gojira, and I love bright, zany, robot-fighting, space-faring Gojira too.

Across the character’s long and storied history, only one man ever embodied the big lizard at both ends of the spectrum. Only one man embodied both Gojira the walking H-bomb and Gojira the proud papa of Minilla. That man was Haruo Nakajima, who recently passed away.

Nakajima was the first Gojira, the original Gojira. He continued to be Gojira all throughout the 50s and 60s, right into 70s. He played the role for 12 consecutive movies, more than any other Gojira suit actor. And now he is gone.

A few years ago, I had the honor of meeting Nakajima and shaking his hand. I was almost surprised at how small and humble he was in person. Still, as colossal as the character he made famous may be, the imprint Nakajima left in the hearts and imaginations of monster movie fans all over the world will always be bigger. 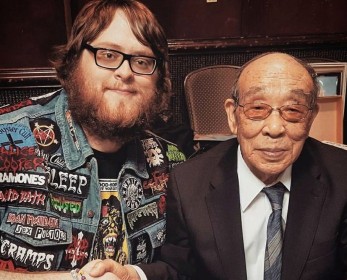